Based in Long Beach, CA, Jennifer Gunlock is a traveler who imbeds her wanderings into the artmaking process. With an attraction to crevices, old growth and decay, she photographically collects imagery such as the gnarled oaks and cemetery crypts of New Orleans, lichen-covered slate rock cliffs of Pennsylvania, and the beautifully decaying Beaux-Arts and Art Deco buildings of Los Angeles, to later deconstruct and assign new meaning in the studio.

Gunlock has earned a BA in Fine Art at California State Polytechnic University, Pomona in 1998 and an MFA at California State University, Long Beach in 2003. She has exhibited nationally and in local venues such as Sturt Haaga Gallery at Descanso Gardens, Los Angeles Municipal Art Gallery, Launch LA, and Angels Gate Cultural Center. She has been Artist in Residence at Playa in Summer Lake, Oregon; Shoebox Projects in Los Angeles; Brush Creek Foundation for the Arts in Saratoga, Wyoming; and at the Pajama Factory in Williamsport, Pennsylvania. In 2014-15 Gunlock participated in in “Fires of Change,” an NEA-funded collaboration between artists and scientists, to translate the social and ecological issues surrounding wildfire in the Southwest. Following a fire science bootcamp in the Grand Canyon, and a year to complete a project, a group exhibition opened at Coconino Center for the Arts in Flagstaff, Arizona in September 2015 and traveled to the University of Arizona Museum of Art in Tucson and 516 Arts in Albuquerque, New Mexico. 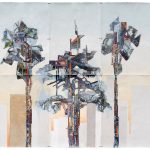 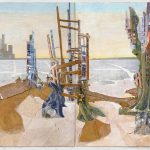 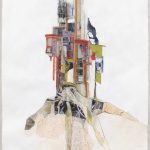