Daniel Barajas’s work explores the fragility of man through moral vices, specifically narcissism and greed. With his large works, he paints the beauty and complexity of the figure emphasizing physical splendor (youthfulness and delicacy) while also highlighting the figures naïve and egotistical behavior via their poses. His figures are lost in a state of self-absorption, unaware of the viewer. They are painted volumetrically in contrast to the flat background, cast shadows and geometric shapes that move across the picture plane. With his small work, he breaks down the complexity of traditional portraiture with the use of monochromatic and highly de-saturated colors stripping away the identity of the figures by obstructing their faces with flat geometric shapes. This sumptuous color flows through the figures and backgrounds in all of his works magnifying the decadence of human vanity and avarice. 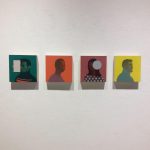